For centuries, some men have delighted in wearing the colourful flora of the natural world on their clothing – from Chaucer’s dandified pilgrim, with a jacket so embroidered with flowers as if he were wearing a meadow, to modern shirts and jackets from Italian clothiers Etro and our own Sir Paul Smith.

It is fair to say that this urge to wear colourful flowers embroidered/painted/printed on their coats, waistcoats, shirts and neckwear was suppressed in the late nineteenth century, but one could argue that it survived, in those sartorially conservative times, in the buttonhole flower worn by the fictional Poirot, and plenty of real men – and continues at weddings today. The hippy movement helped bring flowers for men back into fashion and society, and now men’s shirts can be bought on the High Street that are a delightful riot of floral pattern and colour. Thank God!

There are many items in the Wallis Collection that display this floral advance and retreat (my collection and interest in men’s wear stops at Queen Victoria’s death) but I have chosen two items that particularly appeal to me to illustrate my theme, both of them waistcoats. And here I have to declare my lifelong, abiding love of waistcoats – the most practical as well as most interesting of garments for men. I wear them whether or not they are in fashion.

The two waistcoats under examination in this Blog were both made in the eighteenth century, and evince that age’s love for the natural world. One is English and the other French – but they could easily spring from any other country in Europe, or indeed America. One dates from the 1730’s with the other from the 1750’s/1760’s – the decades when the formal Baroque gardens were being transformed into more ‘natural’ styles by ‘Capability’ Brown, amongst others. And since 2016 is his anniversary year let’s make it a tribute to him!

Waistcoats as we recognise them today were adopted in the West and worn from about 1666, the time when Charles II (it is believed) adopted the startling new fashion of wearing a knee-length garment (initially called a vest – which is still the correct tailors’ term and is used in America). It is believed that this garment was inspired by Eastern dress. The king and his courtiers wore these vests over their breeches and under their knee-length coats. His great rival Louis XIV clung to the older style of cloak, doublet and hose till in the end he too appeared in the English invention of the three-piece suit. Huzzah for Old England!

At first, waistcoats reached almost to the knee, were collarless, cut straight and carried pockets and (often) sleeves. From the beginning they served as brilliant vehicles of display, being embroidered or covered in gold or silver lace in a variety of large patterns, as well as a multitude of fancy buttons. These new garments made a real statement about the wearer’s wealth, status, power and taste (but only if the coat was worn open and could be seen; in the Georgian period coats swept away from the body and thus showed more and increasingly more of the man’s torso and legs).

As the eighteenth century progressed waistcoats shortened, curving gracefully away from the crotch, as the designs on them gradually moved from large Baroque ones (especial favourites were big, colourful flowers) to smaller Rococco ones – and if the pattern contained representations of flowers, these were smaller and were scattered naturalistically over the foreparts (the waistcoat fronts).

Likewise the superfluity of buttons were discarded, leaving functional ones to fasten the garment from next to waist and others being placed beneath the two pocket flaps and, useless except for display, from the waist down, till these too disappeared about 1740/50, along with the sleeves.

The reason for this reduction in the size of the flower patterns around 1740 is obvious – unless he’s a giant, an average man can’t wear large patterns on short garments. The love of the natural world is still very much in evidence throughout the eighteenth and nineteenth centuries in men’s waistcoats, but the scale perforce changes. As the eighteenth century marches on, waistcoats are cut straight across at the waist, grow collars and lapels and become, by the late nineteenth century, what we wear today for weddings or just for that dapper sartorial edge.

So, having given this preamble, let me unwrap two choice examples that illustrate my theme:

Two waistcoats of different fabrics, different decades, different branches of the Christian religion and from different lands. I’ll start with the one that, at first sight, appears Protestant-plain – and therefore doesn’t initially appear to say much about the original owner’s wealth and taste. Pray don’t be deceived….

This stunning yet subtle sleeveless summer waistcoat was made in Britain in the 1730’s – the placement of the pocket flaps immediately proclaims the decade of manufacture. Unusually, the flaps don’t cover pockets – they are shams. Embroidered waistcoats, whether professionally or domestically worked, were always done on the flat fabric before being taken to a tailor to be cut out and sewn up. Hence pocket flaps were usually stitched within a blank area framed by the embroidery design. The garment has ‘Dorset thread’ buttons, more commonly seen on men’s shirts of the era, and is made of linen, lined with cotton, therefore easily washable.

But it is far more than a practical garment, made in the days when clothes were hard to care for: The stunning professional embroidery of French knots and cord quilting displays the original owner’s taste. It was clearly made to be worn in summer and is of sufficient elegance and style to have appeared at a summer wedding.

Per contra, the colourful, sleeved silk waistcoat grabs our attention straight away, with a suitable Gallic flourish! I bought this piece at auction in America, where it had been deaccessioned from the Metropolitan Museum of Art, which stated it was made in France (and who am I to question them?).

I estimate that is was made in the 1750’s/1760’s and is of Ivory-coloured silk faille with a serpentine polychrome floral design brocaded in stunning, fresh colours, and carries metallic gold brocade button holes with corresponding buttons. It has an ivory-coloured silk back and sleeves which typically fasten with a single gold brocade button at the wrist. But as usual with such extravagant waistcoats, the money is reserved for the visible bits, the foreparts (fronts) – which would be instantly seen and judged by impressed/jealous contemporaries. 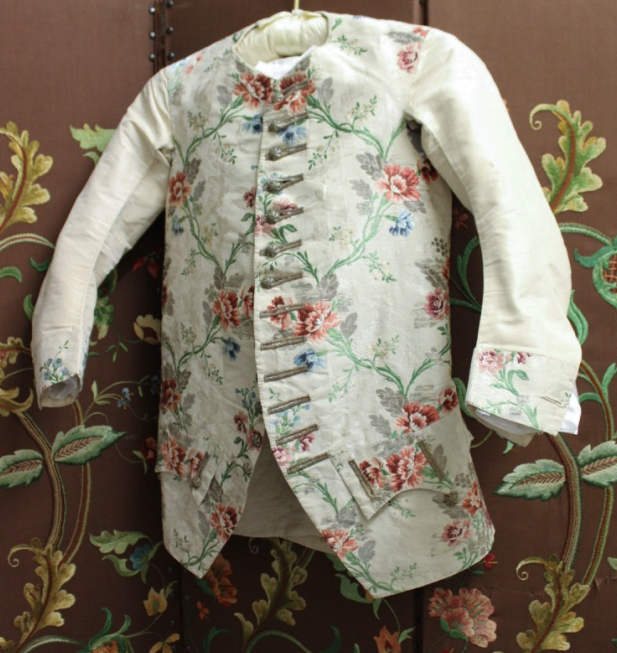 Remember that NO gentleman would ever take his coat off (except to play cricket, though this one is French!)

There are two noteworthy things in this piece, one very common with expensive eighteenth century waistcoats, and the other so rare that I can honestly state that it is unique (at least in the Wallis Collection) and something I have only seen once before, in almost 50 years of obsessing and drooling over waistcoats!

I’ll start with the common thing:

Because textiles were so valuable and expensive most gentlemen instructed their tailors to use the coveted stuff only on the parts of the garment that were immediately visible, as I mentioned above; i.e the foreparts, sleeve cuffs (which would poke out from beyond his shorter coat cuffs) and back skirt flaps (which would peep out between his coat skirts when he moved)  – and not to waste their money on parts of the costly garment that no-one, save his valet, wife, mistress, would ever see. So almost invariably, cheaper, plainer materials were used elsewhere. In some of my waistcoats even the armscyes and shoulders are made of cheaper, plain fabrics, since, when wearing his coat, none would be any the wiser…..He was a wealthy chap indeed who went to the expense of having his sleeves and back as glorious as his front! I have a few such examples.

Incidentally, such waistcoats were sometimes referred to as ‘cheats’ in slang, as the use of visible fancy fabrics,  embroidery etc on the visible bits implied that the whole garment was made of one piece, whereas the reality was quite different. And another anorak detail: the word ‘fabric’ in the eighteenth century was used for the fabric of a building (stone, marble etc) never for clothing; ‘material’ or ‘stuff’ are the correct period terms.

And now, what’s all the fuss about Wallis?

The really rare thing about this waistcoat is that the sleeves aren’t sewn completely shut. There is a gap for ventilation under the armpits – a godsave in a hot climate! Also, surprisingly, the ‘inside’ edges of the sharply angled front flaps, which would be hidden by the coat, are sewn to the back flaps on both sides; I haven’t seen this before and wonder if it was done by the museum to keep it neat for display recently, or if it is a period feature? Doubtless someone reading this will enlighten me (Mark Hutter, master tailor of CW – are you out there?)

Next time I’ll share more waistcoat curiosities with you. But now the Wallis Collection is closed for Christmas stock take.

Posted in Waistcoats and Jackets.

Embroidery is the better technique for such intricate work. ladies did liked this type of coats in the time. It is to be hoped that many more person will like to embroidery because it is a creative art. I also have not seen this type of images above. These all are fabulous. Hand embroidered coats are really very awesome for wear.

Hello James, There are a number of exquisite embroidered garments that survive today, we can certainly learn from and be inspired, by them. We feel very fortunate to have a number of pieces in the Wallis Collection.