It is a truth universally acknowledged that most modern men, when presented with a range of period costumes to wear for a fancy dress party, will choose to wear those styles which go with boots.  Boots are sexy. Let’s face it, some historical male footwear, to the modern eye, looks clownish, girlish, weird, unmanly…think of Tudor shoes, with the strap over the instep, or those long, pointed medieval ‘poulaines’.

What an earth possessed men at those times, we may ask? The top half all rufty-tufty, codpieces bristling, shoulders thrusting like an American football player – to be let down by the lower half, with feel encased in what looks to us like girl’s shoes or ballet slippers. (Of course, we must never judge a period by the mores of our own time).

Take a look at this 1577 painting of Sir Martin Frobisher. The salty Elizabethan sea dog and privateer is clad in leather, as befits a man of action, and brandishes a pistol. There are theories that this picture records what he actually wore on shipboard. And to go with all this macho gear he has chosen shoes! Not exactly fitting our modern image of such a swaggering character. Then again, modern costume designers would put him in black leather, with boots, and probably an anachronistic long black leather trench coat! 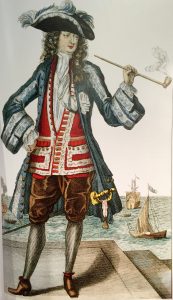 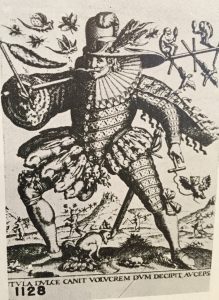 And this is especially true when we think of Pirates. Imagine Captain Jack Sparrow in shoes not boots. Doesn’t work does it? But the few pictures of real historical pirates show them wearing shoes, like gentlemen – which most of them aspired to be, or thought they were. Also, they spent much of their time on deck and far from a stables, so it’s logical – but it’s still not sexy.

Or think of the swaggering, dashing (fictional) highwayman hero of Gay’s ‘Beggars Opera’ of 1728. Hogarth painted Captain Macheath wearing neatly buckled shoes (as well as leg irons whilst in Newgate). But the answer is that, for much of the last thousand years of English history, boots were only pulled on for riding and were taken off as soon as possible. 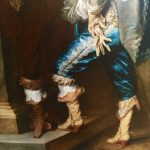 The only exceptions are the reigns of Charles the First (1625 – 1649) and the succeeding Commonwealth (till 1660) when soft, supple boots were worn indoors and out.

And boots enjoyed a universal vogue during the Romantic/Regency period (approx. 1790 – 1830) when riding boots could be worn indoors, outdoors, on foot or, of course, mounted. An English fashion that spread throughout western Europe for a time. 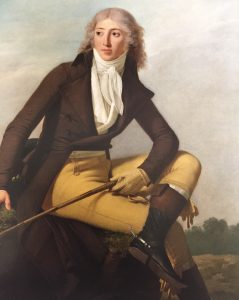 So strict were Society’s rules against appearing in Polite Society in your riding boots that the self-appointed Master of the Ceremonies at Bath Spa and Tunbridge Wells, Richard ‘Beau’ Nash, in the early 18thc famously forbade great ladies to enter the ballrooms sporting aprons like maidservants (though these were costly items of lace or embroidery and were “all the go” in the period) whilst their husbands, lovers and brothers were forbidden entry if they swaggered in straight from the Chase, wearing boots and spurs, like this: 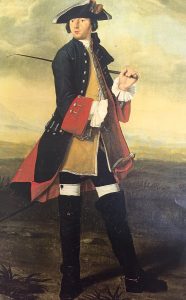 Rule-breakers of both sexes were humiliated in public and forced to change at their lodgings before seeking to re-enter the Assembly Rooms. Some ladies complained: “For why should not we, in dress be as free, as Hog’s Norton squires in boots?” But ultimately all bowed before the Great Nash.

Incidentally, he it was who also forbade the wearing of swords at the watering places over which he long presided – with exceptions made for officers in the Army and Navy. This led to a general decline in duelling and meant that England was the first nation to lead the way to civilisation, though of course duelling still went on into the early 19th century.

Finding men’s footwear made before the 1890’s is incredibly hard to do. I have been collecting since I was fourteen and, after all these years, The Wallis Collection only has two pairs of boots and a few pairs of shoes that were made before the last decade of the 19th century. I guess men just wore them out till they could be patched no longer. One of my favourite collection items is a man’s leather latchet shoe c1650, found on the Thames foreshore – a 17thc equivalent of the single shoe that you often see at motorway barriers. Inexplicable and strange. Where is its mate? Didn’t the owner find it odd to hobble thus home? 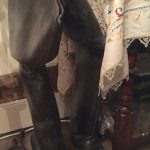 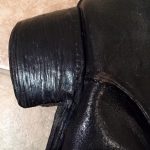 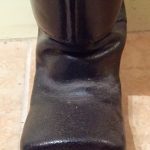 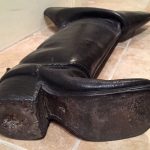 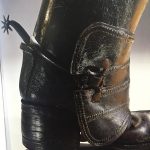 Here are a pair of my so-called ‘Marlborough’ jackboots, made somewhere between 1670 and 1712, according to the authority Miss June Swan of the Northampton Shoe Museum, which conserved them. (As my readers doubtless know, the midlands town was famous for its footwear. My family hail from there and for awhile owned a shoemaking factory; one of the regular customers was WG Grace for his cricket boots!).

The massive cuffs at the knee would protect the wearer’s knees from an enemy on foot in a battle, as well as from thorns etc whilst out hunting. The high stacked leather heels not only follow the fashion of the period but also help to keep the feet firmly in the stirrups. On the underside you can see the leather pegs and hand-sewn details. The Square toes are a fashion that came about in about 1630 and died out about a hundred years later (thereafter the term ‘Old Square Toes’ was a derogatory remark).

Unfortunately, although I have a pair of spurs of the period (not associated with the boots) I don’t have the distinctive ‘butterfly spur leathers’, the decorative shaped leather pieces worn at the instep.

These boots are so stiff, heavy and strong they feel like they’re made of wood! They aren’t remotely supple and must’ve been hell to wear on foot –although the original owner would’ve changed into high-heeled buckled shoes as soon as he dismounted. And they would have been bespoke, so more comfortable. But heavy, and heavy-looking, as they are, they are not to be confused with ‘postilion boots’, those massive black leather boots you see in museums which were actually attached to the saddle, into which the post boy and/or postilion, riding one of the outside horses in a coach and four, would thrust his own booted legs.

Here’s a picture of The Sun King wearing a pair of jackboots which are far fussier than mine; they bear Louis’s signifier of acceptance to the charmed royal circle – red heels and soles. These were condemned as effeminate and unpatriotic in England, though some wore them; the great Whig parliamentarian Charles James Fox wore red-heeled shoes at the start of his career.

Because at the time these boots were made, Englishmen on their travels around the country would often drink beer at inns poured out of black leather ‘Bombards’ (jugs) into black leather ‘blackjacks’ (tankards), amazed foreigners observed that “Englishmen drink out of their boots!.”