Dear Reader, my apologies that the Wallis Collection’s doors have been firmly closed for the last few weeks – I’ve been lecturing overseas (as well as having a few weekends off, dressing up for international Jane Austen Balls). But I’ve opened the collection’s drawers and have been looking through my substantial collection of gents’ neckwear, so thought I’d share some of the rarer and more interesting pieces. Looking at the elegant items, I am reminded of how men used to present themselves for Society, and feel a rant coming on when I consider how few these days bother (flipflops in London?! Cargo pants?!) Sadly, Lord Chesterfield’s advice to his son that “You please yourself by pleasing others” seems to have gone the way of hats and, increasingly, neckties…

But we live in a slipshod age when even our Prime Minister flings off his jacket at the faintest excuse, and – unforgivably and as ill-advisedly as William Hague in his baseball cap – refused to wear a black tie at a black tie event. I notice he hasn’t made that sartorial solecism again. And, by a circuitous route and much ranting, this leads me to my topic for this Blog: Neckwear.

Personally I rarely wear ties anymore, in common with most men these days (though I still have a colourful collection, including painted 1940’s and 1950’s American ones) but I do wear cravats daily, and am pleased that some others share my taste. My granny (a professional seamstress in the early 20thc) always believed that a man wasn’t properly finished without neckwear – and the older we chaps get, the more the neck and throat sag, bulge and wrinkle, so a cravat serves a dual purpose. The neckwear in my collection would have hidden many a fault as well as complemented the wearer’s apparel, and ‘finished him off’ smartly.

My clothing and accessories collection starts with a few rare items of male dress dating from the late 17th century, but I don’t have neckwear from this early period and probably never shall: I would love to own an example of the typical long linen cravat (or neck cloth, as it was generally called in English) either fringed, finished with point lace or plain. Hen’s teeth. These items are extremely rare, as rare as pre-Victorian men’s shoes.

But I’m fortunate to own two fairly rare examples of neckwear from the about the middle of the 18thc – a couple of pleated linen stocks. They are chance survivors because once out of fashion they were generally discarded, as they weren’t large enough to repurpose.

The long neck cloth/cravat, that had been in fashion since the reign of William and Mary and was wrapped around the throat and left to dangle down the chest (sometimes with one end threaded through the buttonhole of the coat, ‘Steinkerk fashion’) was succeeded, by the third decade of the 18thc, by the stock, a simple, pleated linen band which encircled the throat and was worn over the narrow standing shirt collar. 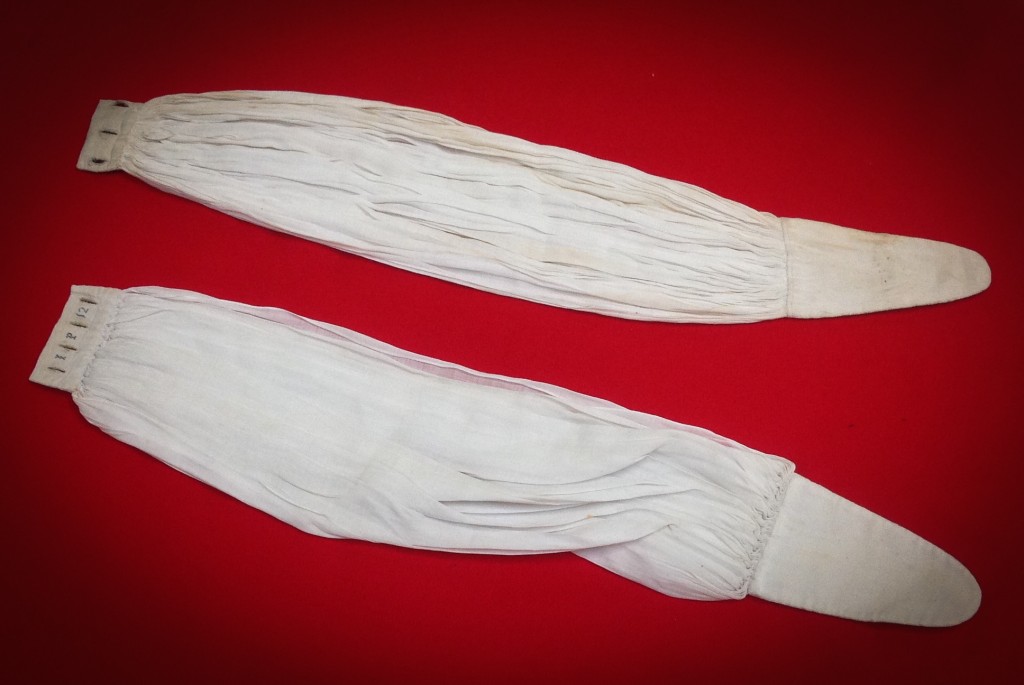 One of them bears the owner’s initials and the number of his stocks, in laundry mark cross stitch, which is commonly seen also on shirts of the era. 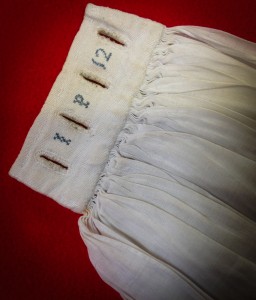 These always fastened at the back of the neck, generally with buckles. (It’s always a delight to inform antique dealers as to the real purpose of the three or four-studded silver or silver/paste (glass) little buckles they offer for sale; they never know). I have a good collection of these charming silver buckles but only once saw a gold one, which I couldn’t afford. 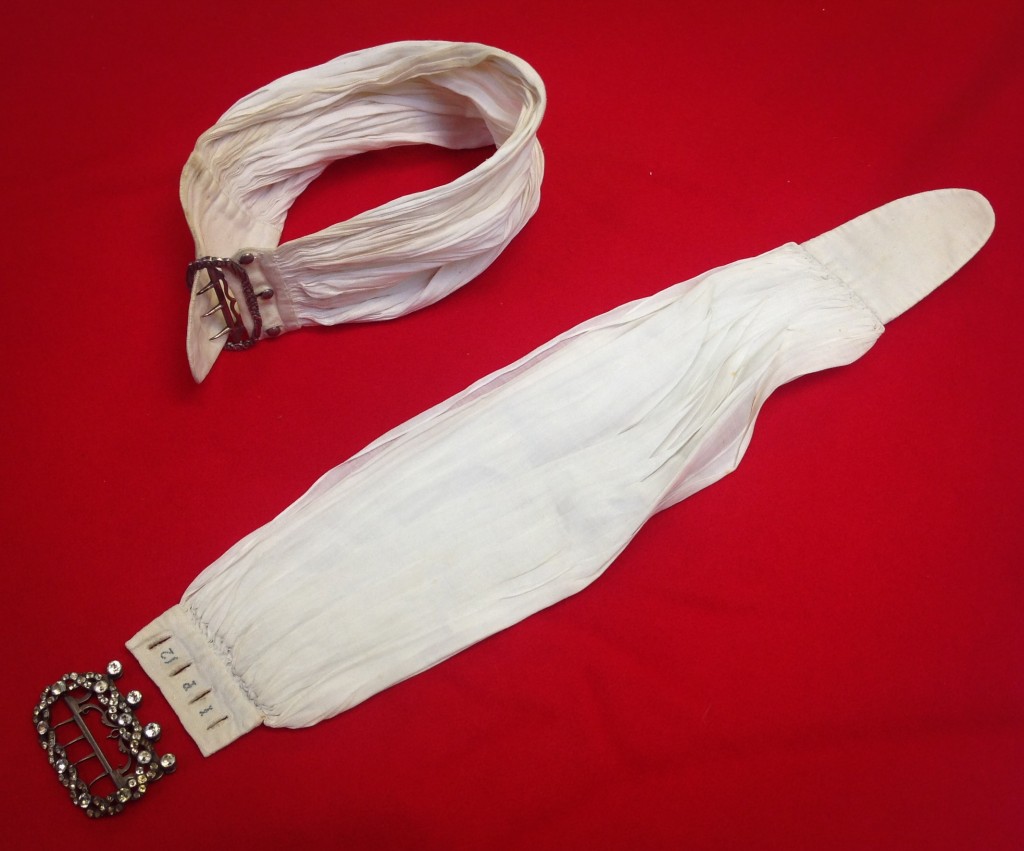 As the century wore on, stocks increased in height and were sometimes stiffened with pasteboard, therefore very uncomfortable – but no more so than those high, rigid black leather ones worn by the private soldiers in most European armies of the time.

“My neck is stretched out in such a manner that I am apprehensive of having my throat cut with the pasteboard.” Gentleman’s Magazine 1761

“I wish that he who first changed long neckcloths for such things as you wear had the wearing of a twisted neckcloth that I would give him!” Garrick in ‘Bon Ton’ 1775

But if there isn’t much to say concerning the insignificant neck stock’s fashionable reign of approx. fifty years, there is a great deal more to say, and to show, about the stock’s flamboyant successor, the cravat aka neckhandkerchief or neckerchief. For the purpose of this Blog I shall use the French term, cravat (which, by the way, comes from Croatia and involves getting dressed for a battle – but that’s another story…) 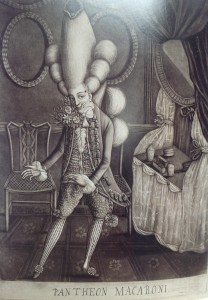 “A large muslin cravat wound three times around the neck, the ends of which are trimmed with a deep fine lace edging and tied in a large knot under the chin.” Ipswich Journal 1788

Balzac considered that the cravat, the fashionable neckwear of his day, could thrive only on originality, ingenuity and personality; and that it indicated whether the wearer was a man of refinement, or merely ordinary. And his famous counterpart in Britain, ‘Beau’ Brummel, spent many hours getting his starched cravats just right. After all that effort, you wouldn’t want it to get disarranged – and if it was…

“The greatest insult that can be offered to a man, comme il faut, is to seize him by the Cravat; in this place blood only can wash out the stain upon the honour of either party.” Balzac

“All is unprofitable, flat
And stale, without a smart CRAVAT;
Muslin’d enough to hold its starch –
That last keystone of Fashion’s arch!” 1820.

The last few decades of the 18thc saw the newly-fashionable cravat adorn the necks of most men, from the foppish English ‘Macaronis’ of the 1770’s (see above) and their fellow-countrymen, the ‘Crops’ of the 1790’s, through their brothers across the Channel, the ‘Incroyables’, ‘Muscadins’ and slovenly ‘Sans Culottes’ of the French Revolution. 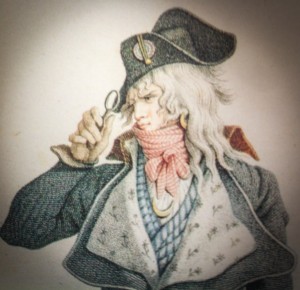 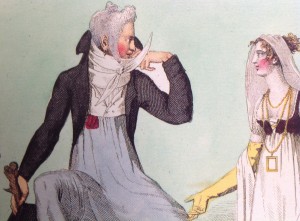 Poets wore them one way, revolutionaries another… Sailors, bankers, businessmen and prizefighters, all could be recognised by the way they wore their cravats. In fact, semi-serious guides to the many manifold ways of tying one’s cravats were published in the first decades of the following century, bearing such titles as ‘Neckclothitania or Tietania’ from 1818 and in 1828 ‘The Art of Tying the Cravat’. Various names were given to various ways of tying cravats – the Hibernian, the Corsican, the Yankee, the Mail Coach etc…it must have been hard to keep up with the various modes in vogue at any given time! 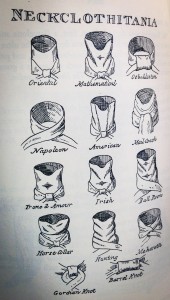 During the lengthy wars with Napoleon uniforms were ‘quite the go’, the height of fashion, and the coats of His Brittanick Majesty’s army were the most arresting and dynamic of all, being red. This cast civilian men, in their duller blue, green, brown, claret, grey or black coats quite into second place (proving the truth of Dr Johnson’s maxim that ‘Every man thinks poorly of himself for not having been a soldier’). So to alleviate this, some men sported black silk cravats, in imitation of army officers, whilst others, hoping to be taken for sporting men, members of ‘The Fancy’,  donned the coloured and patterned neckwear worn by that great English bare-knuckle boxing hero, Jemmy Belcher. I have a few examples of ‘Belcher’ neckerchiefs, which in fact come from a wealthy American industrialist family, with provenance, about 1810-20. Such cravats were very much informal wear. 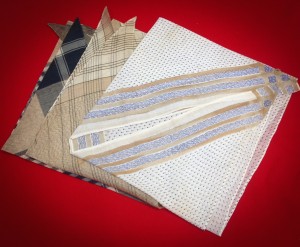 Such ephemeral and class flirtations aside, white remained the correct wear for most occasions, and for all court and evening ones, though it was superseded from c1825 in day wear by black (apparently at the urging of the Prince Regent, our King from 1820 – then worn as a safe, respectable colour for the rest of the century). However coloured, spotted, striped and checked varieties emerged from the 1830’s to rival black. But evening dress mandated white for much of the period. As the century wore on and men started sporting beards (after the Crimean War) neckwear shrank in height and the bows became smaller, as facial foliage masked the men’s neckwear. 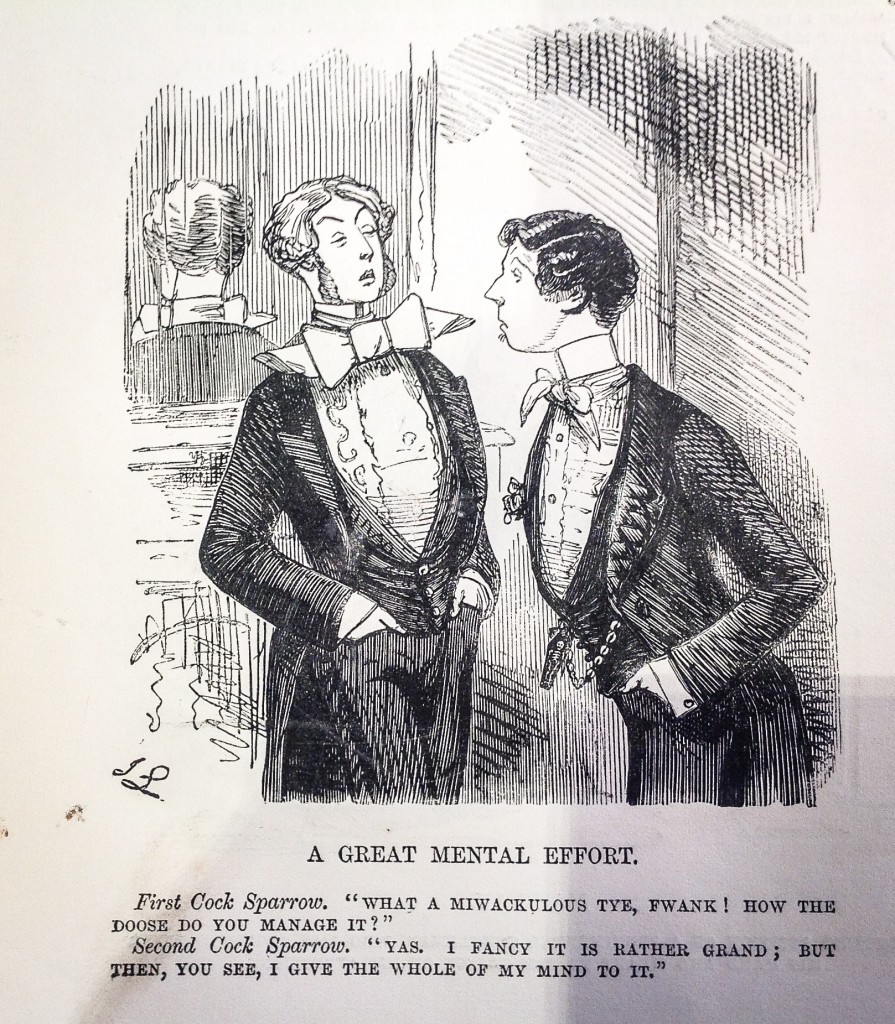 Here are some details of three of my cravats, two made of fine cambric and one of moire (watered silk). These could be worn for day or evening functions in the first half of the 19thc. 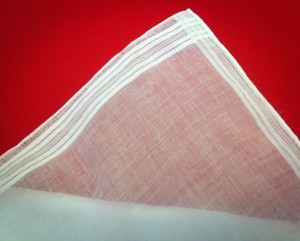 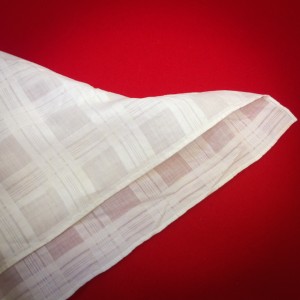 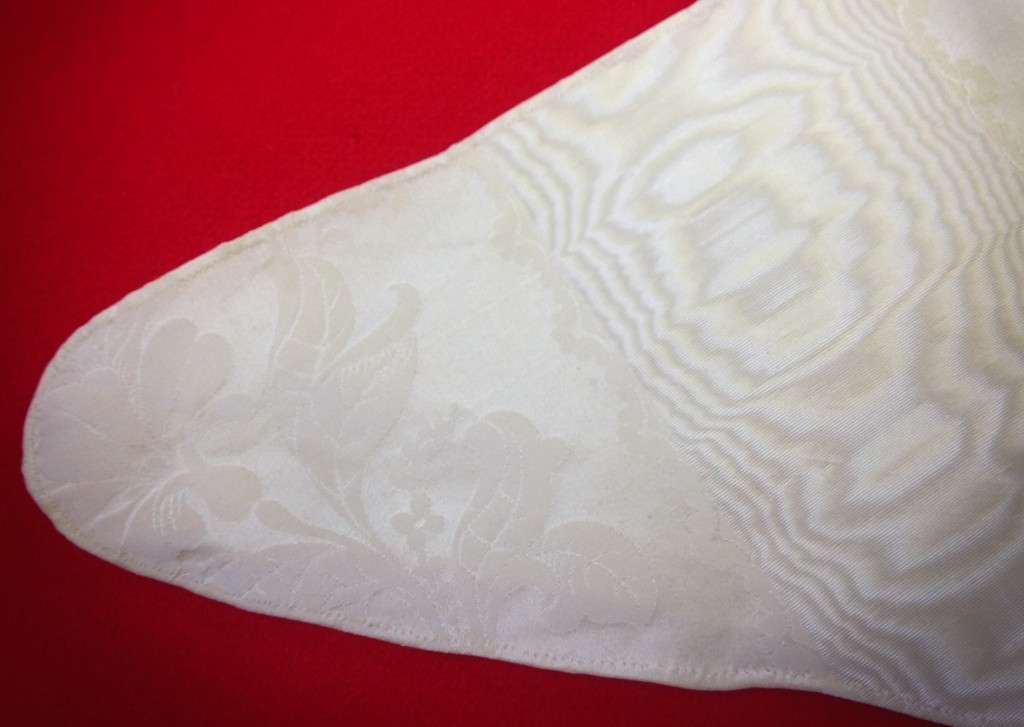 But the old stock had never quite gone away. With the increasing height of cravats through the first three decades of the century and the troublesome starching and tying required, some men found it easier to purchase ready-made stocks, in white or, by the 1830’s, black, which fastened at the back of the neck and sported a readymade neat, hand-sewn bow. These 19thc stocks followed the line of the cravats and rose and fell with them. 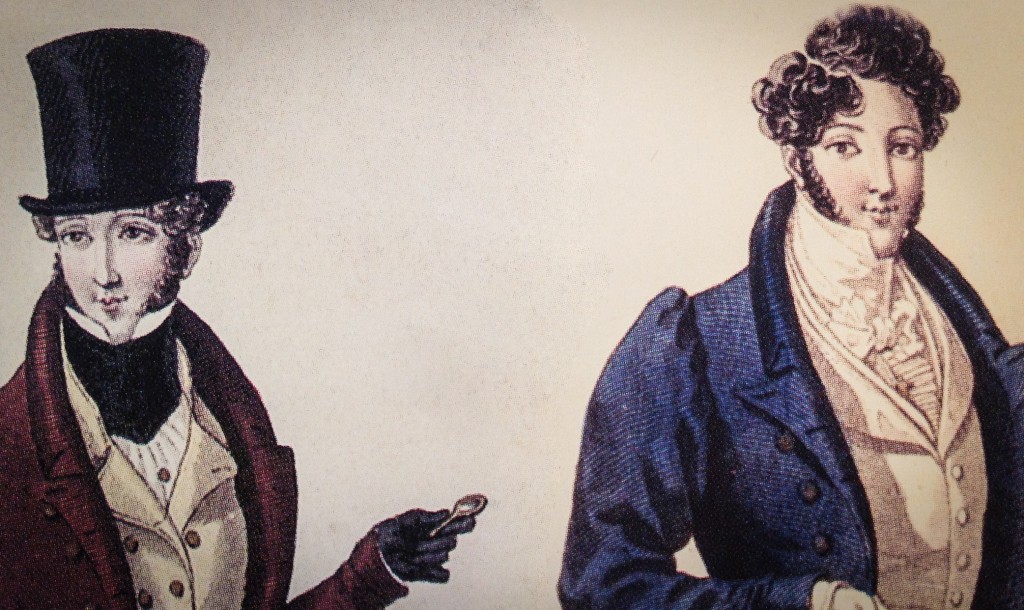 Here is a white satin stock from my collection, which is pleated and interlined with horsehair. It has a pre-formed, ready-made bow and buckles at the back of the neck, c1820-30.

And here are two scarce black stocks in my collection, the  lower one dating from the 1850’s whilst the one above was made circa 1840: 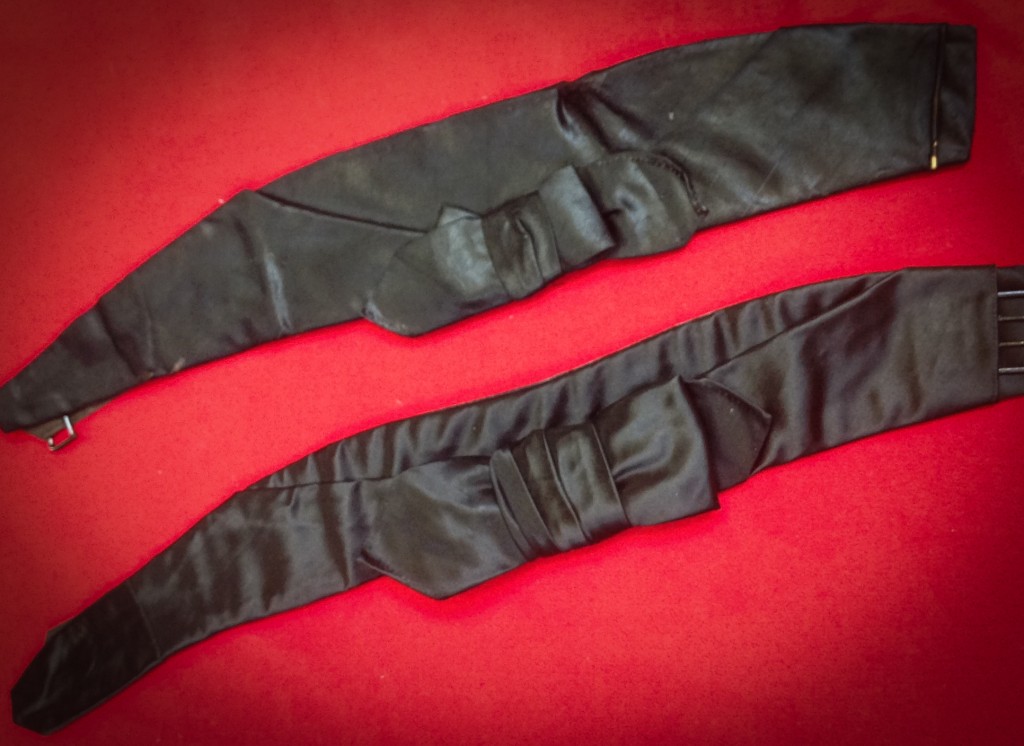 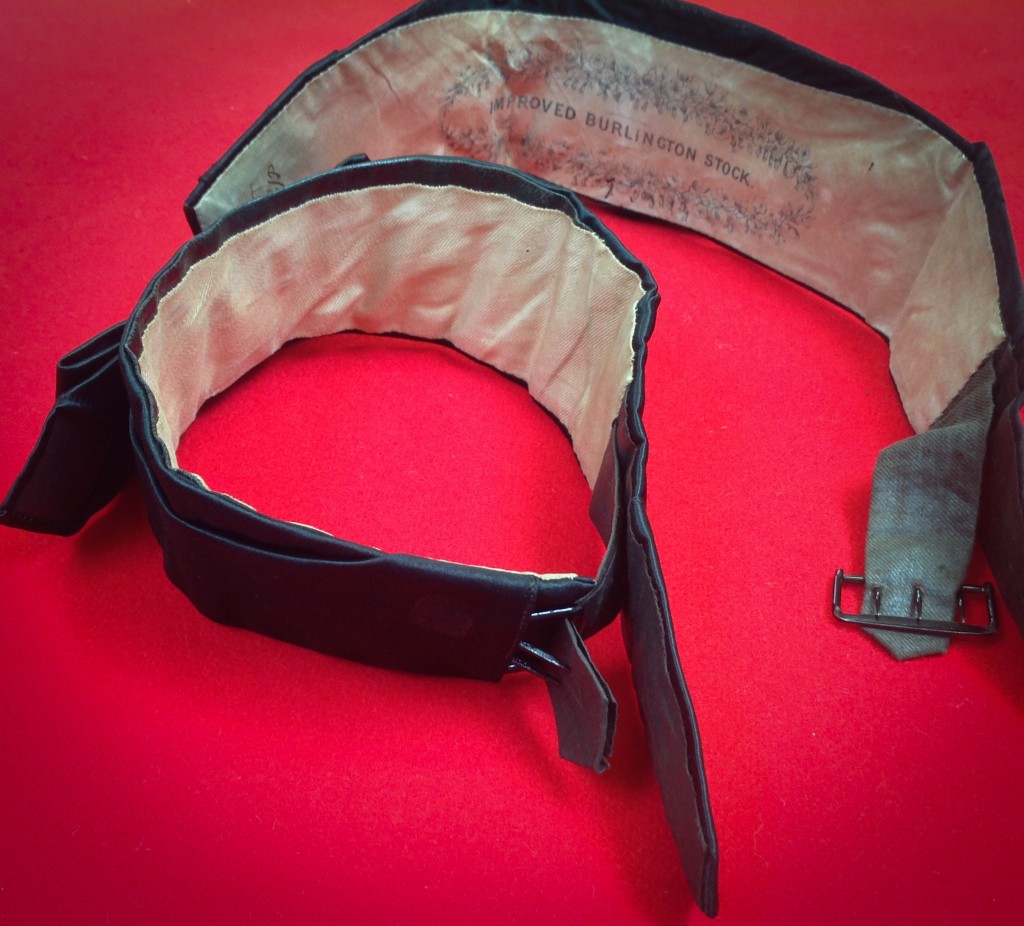 Fashion always goes in cycles, so when one extreme is reached it’s never long before it’s opposite is in vogue, and the previous style is mocked and thrown into outer darkness. And so it was with men’s neckwear.

The Regency dandy’s multi-folded and heavily starched three-inch deep neckwear dwindled, for the sporting Muscular Christian of the 1860’s, to an inch of ribbon, whilst his coat, waistcoat and shirt collars shrank in height.

‘An elegant substitute for the cravat is a bit of broad shoe-string, to which the recherché name of “Byron Tie” has been given.’ Punch. 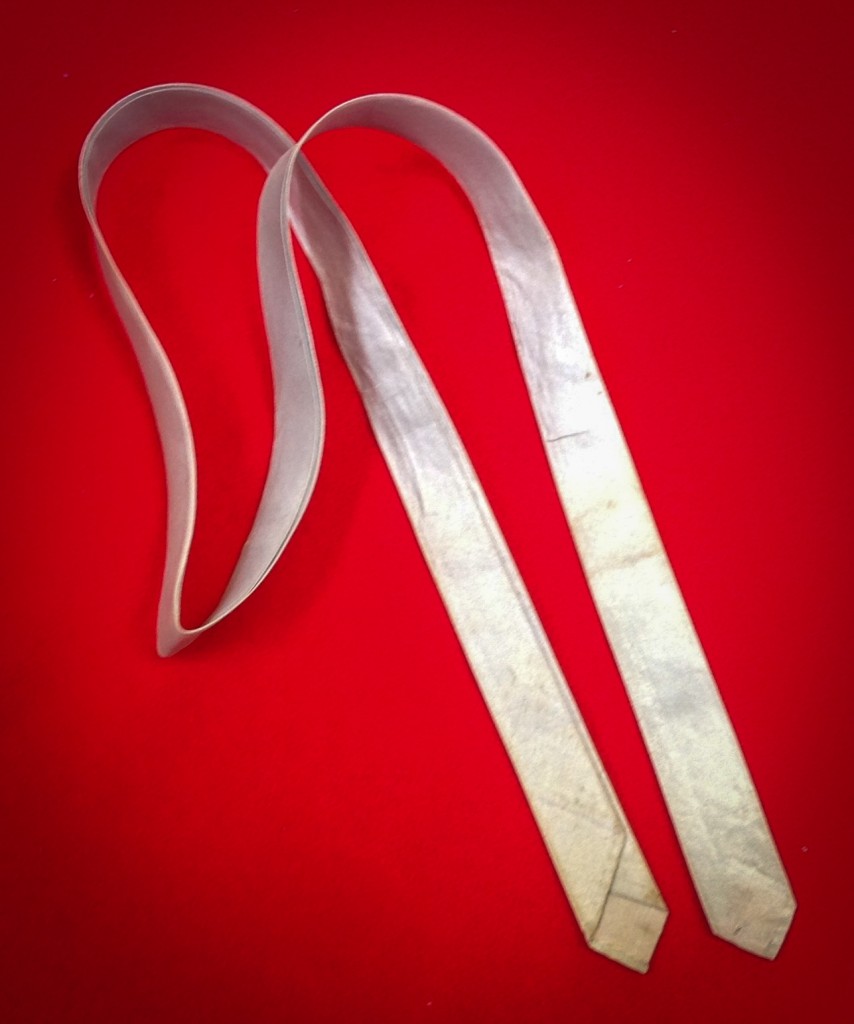 Here is a wedding tie made in 1863, according to a letter in the pocket of the accompanying brocade waistcoat.

And after a while, predictably, a reaction set in: Collars (though for shirts only) rose to three inches by the end of the century, and various elegant ties, both ready-made and self-tie, were worn with them.

But that is another story and it’s high time to don my cravat and venture out into the City….

4 Comments on "Ahead by a Neck"

Welcome back to the Blogoshere, Mark. Always good to hear from you and not only see selections from your marvelous collections, but also to learn so much from your vast store of knowledge. Have fun ‘working,’ the various period themed events and when you return, we (your Loyal Readers) will be delighted to hear more from you!

Thank you Llywelyn, it’s lovely to hear from you.