I’ve just opened the drawers of the Wallis Collection for inspiration and come across my pairs of original Georgian leather breeches, so I shall make these the subject of this Blog.

I remember when punk first reared its (self-consciously) ugly head in Britain. Everybody was saying how terribly new it all was and that nothing like it had happened before. Rubbish, I replied. Young men in the 1790’s were being just as shocking and disrespectful to their elders (though safety pins hadn’t been invented). Wealthy fellows born in the 1770’s came of age during the French Revolution and, enthused by that – initially liberating – event across the Channel and its democratic appeal to brotherhood and equality, spurned their fathers’ colourful, embroidered clothes, wigs, silk and lace and dressed like the Lower Orders. In their self-conscious uncouthness and rustic, common attire they could not have been more different than the prancing, powdered and perfumed ‘Exquisites’ and ‘Macaronis’ of the previous generation of elite young men of twenty-odd years before. 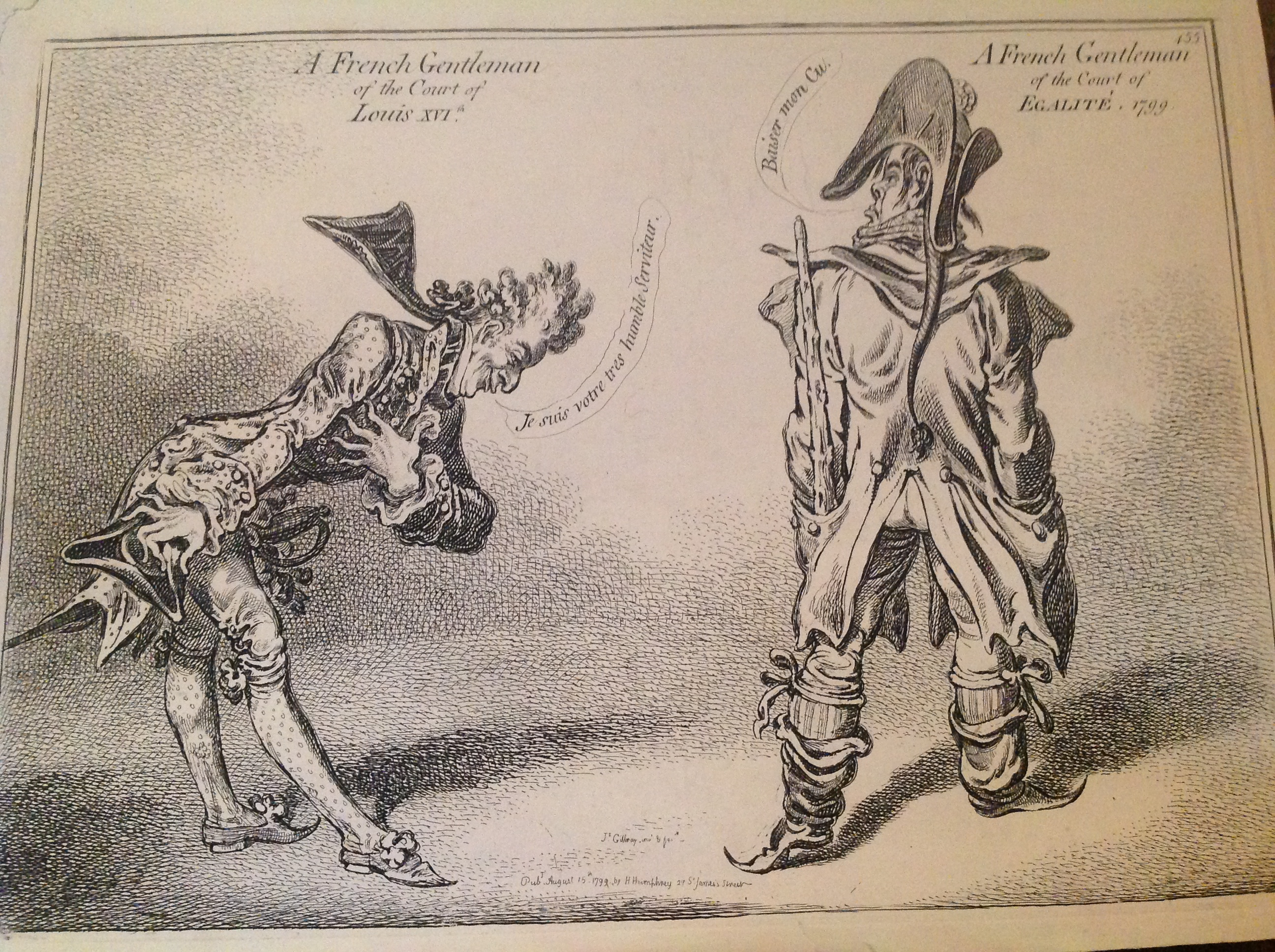 The new generation dressed like their own grooms and coachmen – and not just on the hunting field, but in town. To earlier generations this was scandalous. Young men of education and means, chaps from ‘the Ton’ dressing in unadorned broadcloth coats, simple linen waistcoats and leather breeches with riding boots? Unheard of! Monstrous! To their fathers, specific apparel belonged to specific times of day as well as in specific locations.

These young men were busy discarding those rigid rules of polite society. 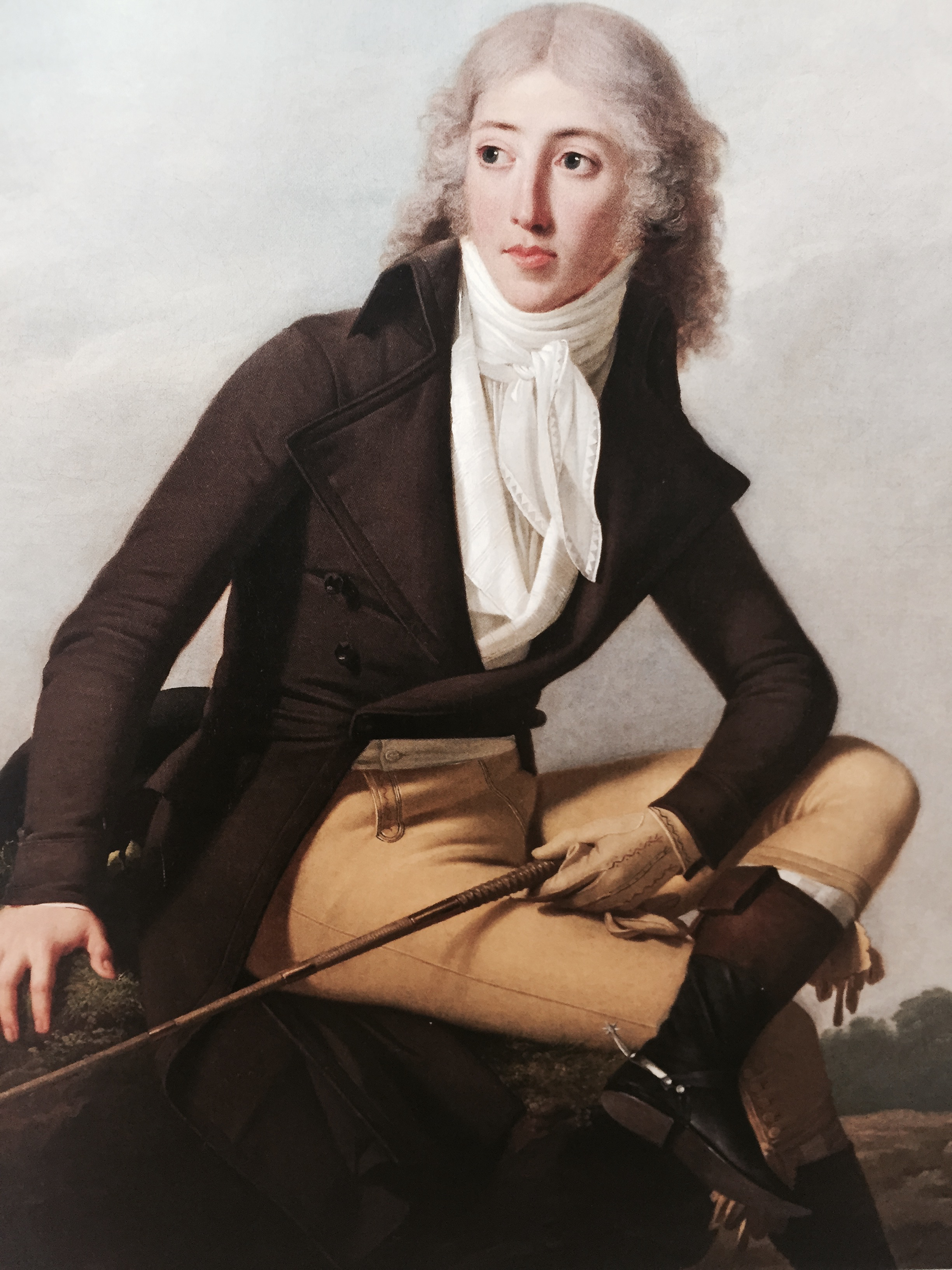 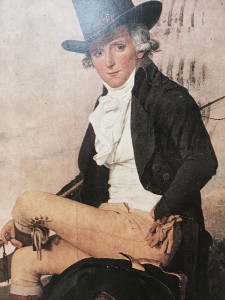 And for some, their manners matched their apparel. These ‘Bucks’, ‘Bloods’ and ‘Crops’ of the 1790’s pushed other pedestrians aside as they swaggered arm in arm down Bond Street, with long, unpowdered hair – or worse, cropped hair a la Titus and bushy side whiskers – and great knotty sticks in their hands, with round hats (top hats) plonked carelessly on their heads; while their sisters sat on, not at,  tables, swinging their legs and uttering oaths. Now this was of course only acceptable for the top 1% of Society, though as always the middle classes aped their betters, and some of the lower classes looked forever upwards, whilst others were simply too wretched to care.

For the first time France looked to England for fashion tips for both sexes, since the tumbrils were rolling towards the guillotine, filled with aristocrats. One simple way to escape the fury of ‘The Terror’ was to dress ‘a l’Anglais’ in simple country clothes. ‘Anglomanie’ took root (and a Gallic version of English country clothes are still worn in France). The cartoon by Gillray, above, shows clearly the change in manners and dress between the mannered gentleman from the Ancien Regime and the course Citizen of Revolutionary France, with his foul-mouthed “Baisser Mon Cu!” (Kiss My Arse).

Simple, sturdy breeches of buckskin or doeskin had long been worn for practical pursuits, as useful and acceptable attire for aristocratic huntsmen as for artisan cobblers; this garment bridged the classes.

This example dates from the last decade of the 18th or first decade of the 19th century, as evidenced by the fact that the garment has horn, leather-covered buttons for newly-fashionable braces, as well as those needed for closing the ‘small fall’ (front flap). Buckles at the knee would be difficult to fasten so ties of leather were used to close the breeches below the knee, and, as in textile examples, these breeches have a tie (in this case also of leather) to tighten at the back. The cut is identical to that used for ordinary breeches.

I have other examples of leather breeches of this period, all of which are similar, save for one rather grubby and obviously well-loved pair of leather pantaloons, which reach down the calf where they fasten with leather ties and are closed at the top with metal buttons, with a ‘whole fall’ (wide flap, as in sailors’ trousers). The Wallis Collection also has white leather breeches from the mid and late 19th centuries – one pair belonging to the Household Cavalry and the other pairs made for the hunting field. My interest wanes with the advent of the classic film director/dictator style of breeches which are wide on the outside of the leg – I think they look ridiculous, but I have one pair.

Such practical, commonplace garments crossed the Georgian divide between workshop and hunting field to drawing room, but never made it to court occasions. The rules were strict on this point. And the sloppily-dressed young men about town of the 1790’s matured into middle-aged men wearing well-cut, beautifully-tailored garments, beholden to ‘Beau’ Brummel’s edicts upon dress, that everything one wears must be of superior quality and beautifully tailored.

As a costume historian I find it interesting that the desire to dress down, in working men’s denim and even expensive, pre-ripped jeans, still holds sway, and that some public schoolboys disguise their privileged vowels by using ‘Mockney’ (Mick Jagger being the prime example I can think of; it doesn’t fool anybody).

Thank you for reading this. I shall bring another item out of storage next time – perhaps it is time for some gents neckwear… 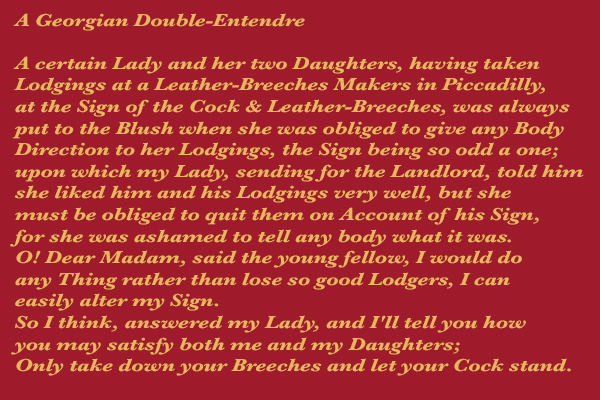