In studying clothing of past centuries one quickly shares the delight our ancestors took in colour, fabrics, shape, novelty, cut, accessories and decoration.

Now of course, this statement applies principally to those with money, whose clothes survive in far greater numbers that those of the working classes – but even they would try to be as respectable as their circumstances allowed; poverty was a badge of shame, meaning that everyone who had the means to ‘turn out well’ did so, at least on the Sabbath Day. And for the wealthy, in the courts of Christian Europe, from the middle sixteenth century until about the close of the eighteenth, one quite literally wore one’s wealth upon one’s back. Which meant that clothing for the aristocracy often gleamed with diamonds, sparkled with gold or silver lace, blazed with bright embroidery, rustled with silks, swung with tassels…in fact, the clothing could be so loaded with surface decoration that the ground fabric (expensive enough on its own) often couldn’t be seen. Conspicuous consumption at its most extreme, to satisfy the vanity of a monarch and worn to show that you were one of the ‘in crowd’.

But the subject of this Blog isn’t articles of court clothing in the Wallis Collection – that is to come – but rather a brief study of two different, related, examples of decoration on more everyday clothes for the well-off (though both examples were also worn at court as well as upon other occasions). Both spring from the ‘more is more’ aesthetic beloved of our ancestors in the eighteenth century – which the modern minimalist would condemn as being unnecessary and absolutely  ‘over the top’ (words of high praise in the Wallis lexicon): Fringes and Tassels.

Fringes
For the first couple of decades of the eighteenth century some gentlemen added an extra touch to their luxurious, knee-length waistcoats – a deep fringe of gold or silver bullion, hanging down from the waist, where it started, in heavy twists of shimmering coiled metal wire and running down the hems to the bottom edges on both sides. I don’t have an example in the Wallis Collection, yet, and surviving examples are rare, as are contemporary depictions of men in them. But to show what I mean here’s a redrawing by the redoubtable Cunningtons of a chap circa 1720 in his fringed waistcoat.

And at the start of the Augustan Age fringes sprouted everywhere, from neckcloths to gloves (where they remained since the 16thc): The portrait of Thomas Wyse in his splendid grey peruke and red, gold-laced coat shows him wearing the briefly-fashionable fringed cravat, threaded (unusually) through his waistcoat buttonhole.

The fad was short-lived but was revived by the gentlemen’s grandsons in the 1780’s, but this time round the fringes were narrow, about half an inch, and made of floss silk – generally white but other colours were used, often two or three at once, as in these examples from the Wallis Collection. And unlike before the fringe was used as edging all along the garment – sewn along both hems, edging the standing collar and lapels and around the welted pocket flaps, in both single and double-breasted examples. The curious thing is that, being narrow, the fringe stands up at the collar and tops of the pockets, projects sideways at the sides of the pockets, lapels and on the chest, and hangs down on the bottom hems. But I guess this didn’t bother the delighted dandified owners…

Here are three examples of the four fringed waistcoats in the Wallis Collection. The one on the right I bought in Paris, after some idiot had washed it and the colours had run, but the embroidered diamonds reminded me of Art Deco design, and the silk fringe is multi-coloured and superb. I had to get it! French clothing was, and is, generally more stylish and noticeably different from ours. The curious standing single plant/leaf shapes embroidered in chain stitch and placed within the diamonds are echoed in the waistcoat on the left of the picture, which I recently acquired in America but is probably of European origin.

Both waistcoats have standing collars and lapels and date to circa 1788-1795, but this one is double breasted. And, typically for the times, both are economical with the silk fabric foreparts, as you’ll see if you look around the shoulders; you’ll spot cheap linen rather than expensive silk, because of course the gentlemen wouldn’t remove their coats in company.

The one in the middle I am sure is English (though not solely because it bears a Victorian exhibition label ‘Property of the Countess of Northampton’). It is of slightly earlier date than its stable mates, judging by the antiquated inverted ‘v’ cut and lack of lapels, although it bears the newly-fashionable welted pockets – a transitional piece. It is less flashy than the other two but to my mind, their superior. Made of silk with vertical velvet strips woven with a standing tulip design covering the foreparts, the whole garment is edged with a narrow four-coloured silk floss fringe and the hems of velvet strips are woven with standing flowers in vases: an intricate piece and expensive in its day.

The fashion for fringes dies out at the close of the eighteenth century (the fourth fringed example in my collection that I haven’t shown is of typical Empire/Regency cut, made of white satin with a white silk fringe) and none of my 215 late Georgian/Victorian waistcoats have fringes so I guess that was it…for now…

But since fashion designers always plunder from the past, perhaps a revival is due?

Tassels
I suppose you could argue that tassels are really a form of fringe, but coiled into circles not stretched out lengthways? But this is an example of a fashion that was as appropriate at home on dressing gowns, at court in Full Dress, in the hunting field and promenading in parks and spas, from Bath to Baden-Baden.

So why did Georgian gentlemen wear strips of braid/frogging, terminating in tassels, on their clothing?

The black and white picture shows Louis XIV wearing what he considered was correct Hungarian costume for a court masque – though the only indicator of Magyar dress is the frogging across his chest, which the Hungarians took from their Turkish conquerors. Nevertheless, it added a touch of the exotic, and the Hungarian Hussars were the toast of Europe for four centuries, so who can blame the Sun King for wanting some of that for himself, though he wasn’t the first monarch to adopt this style of a braided coat – Henry VIII had his ‘Polish’ gown (the terms and styles were often interchangeable). 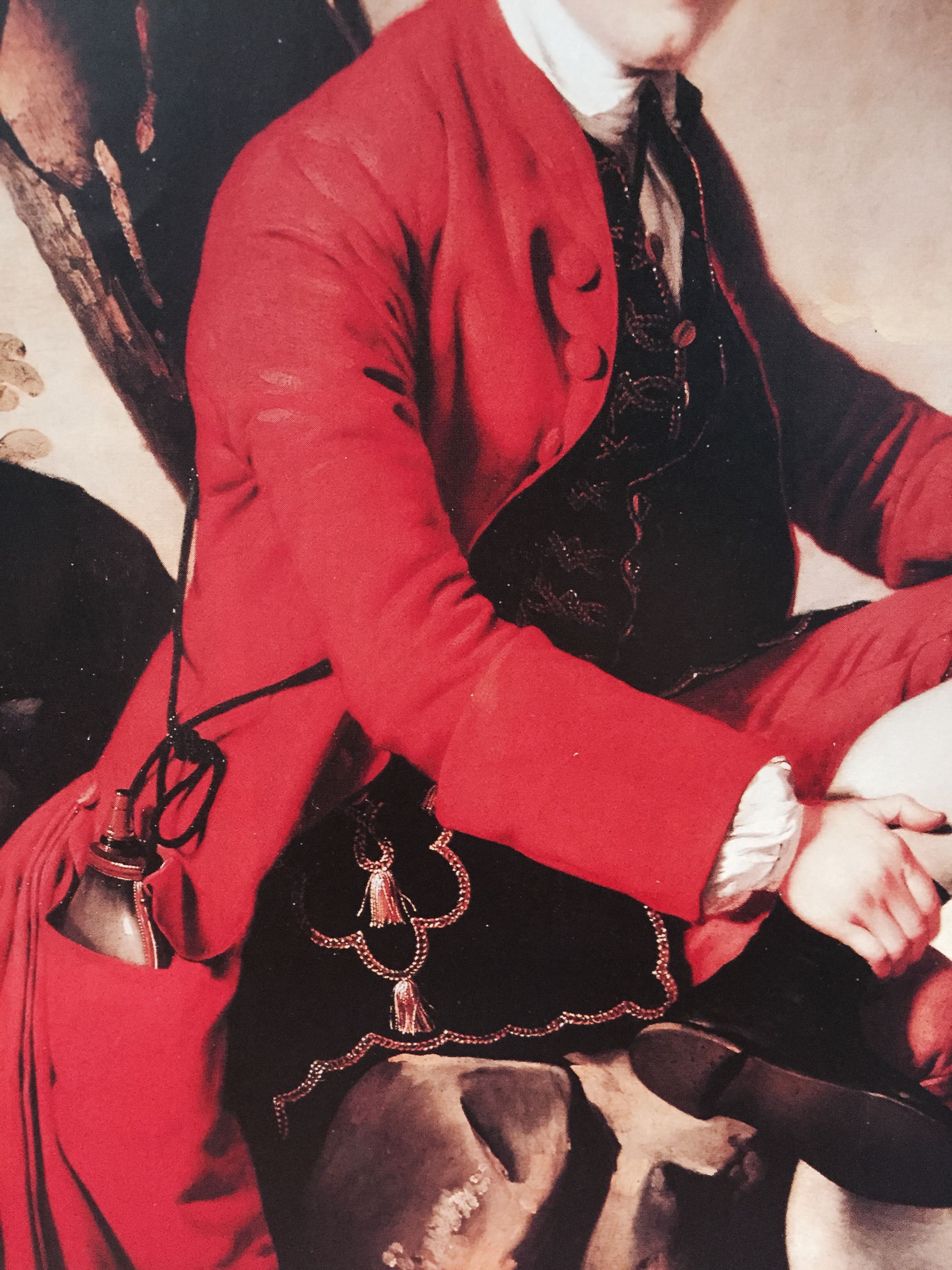 Charles Jennens takes this fashion to extremes in Thomas Hudson’s splendid portrait, now at the Handel House Museum. His green velvet coat is ornamented with extravagant twisted gold-looped metal frogging, terminating in heavy metal tassels, whereas Joseph Wright of Derby’s portrait of the huntsman in the field shows him sporting a surely rather impractical and easily damaged gold fringed blue waistcoat under his red coat.

The Wallis Collection boasts two tasselled coats, circa 1770-1780; one French and the other English, belonging, I am sure, to a ‘Macaroni’, the extreme fops of the 1770’s.

The latter coat is in need of conservation but you’ll see the once-splendid crimson silk tassels on the cuffs, fronts and pocket flaps, and here’s a picture of a detached tassel.

This coat is very similar to the green one worn by the unknown gentleman holding his cane in this portrait of the 1770’s.

The elegant green silk, pink lined French coat (with the newly-introduced inside pockets!) circa 1780 in my collection dispenses with frogging altogether, it just has beautiful tassels sewn down both fronts.

Tassels dropped off civilian men’s clothing by the close of the eighteenth century but continued on uniforms throughout much of the nineteenth.

And my final image is of a smart, military-looking cream wool waistcoat in my collection circa 1790 with embroidered silver tassels and swags. I have seen an almost identical one with Prince of Wales crest gilt buttons and now wonder if they formed part of some uniform for Prinny’s household? Hmmmm…

The redoubtable Avril Hart OBE told me, many years ago when she ran the V&A’s Textiles & Dress Department, that there will be some items in my collection that will defy explanation…

Whilst I head off to muse upon these wise words I shall shut up shop, for now. And thank you for reading!

Posted in Waistcoats and Jackets.